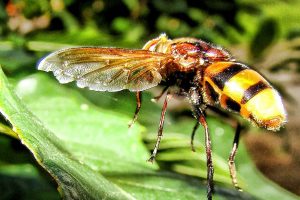 Specialized Pest Patrol of Sacramento has over 2 decades of experience performing cost-effective yellow jacket control for the residents and businesses in Sacramento, Folsom and Roseville areas of California. We provide effective and affordable control services since 1994.

If you see a yellow jacket nest consider calling us.  They can be agressive if their nest is disturbed and unlike bees, they can sting multiple times. Our team is trained to safely remove them and their nest.

Yellowjackets are social hunters living in colonies containing workers, queens, and males (drones). Bee Colonies like Yellowjackets are annual with only inseminated queens Overwintering. Fertilized queens are found in protected places such as in hollow logs, in stumps, under bark, leaf litter, soil cavities, and man-made structures. Queens emerge during the warm days of late spring or early summer, select a nest site, and build a small paper nest where they lay eggs. After eggs hatch from the 30 to 50 brood cells, the queen feeds the young larvae for about 18 to 20 days. Larvae pupate, then emerge later as small, infertile females called workers. Workers in the colony take over caring for the larvae, feeding them chewed-up meat or fruit. By midsummer, the first adult workers emerge and assume nest expansion tasks, foraging for food, care of the queen and larvae, and colony defense.

From this time until her death in the autumn, the queen remains inside the nest, laying eggs. The colony then expands rapidly, reaching a maximum size of 4000 to 5000 workers and a nest of 10,000 to 15,000 cells in late summer. The species V. squamosa, in the southern part of its range, may build much larger perennial colonies populated by dozens of queens, tens of thousands of workers, and hundreds of thousands of cells. At peak size, reproductive cells are built with new males and queens produced. Adult reproductives remain in the nest fed by the workers. New queens build up fat reserves to overwinter. Mature reproductives leave the parent colony to mate. After mating, males quickly die, while fertilized queens seek protected places to overwinter. Parent colony workers dwindle, usually leaving the nest to die, as does the founding queen. Abandoned nests rapidly decompose and disintegrate during the winter. They can persist as long as they are kept dry but are rarely used again. In the spring, the cycle is repeated; weather in the spring is the most essential factor in colony establishment.

The adult yellowjacket diet consists primarily of items rich in sugars and fruits, flower nectar, and tree sap. Larvae feed on proteins derived from insects, meats, and fish. Workers collect, chew, and condition such foods before feeding them to the larvae. Many of the insects collected by the workers are considered pest species, making the yellowjacket beneficial to agriculture. In return, Larvae secrete a sugary substance for workers to eat; this exchange is a form of trophallaxis. As insect sources of food diminish in late summer, larvae produce less for workers to eat. Foraging workers pursue sources of sugar outside the nest, including ripe fruits and human garbage.

Yellowjacket nests usually last for only one season, dying off in winter. The nest is started by a single queen, called the “foundress.” Typically, a nest can reach the size of a basketball by the end of a season. In parts of Australia, New Zealand, the Pacific Islands, and southwestern coastal areas of the United States, the winters are mild enough to allow nest overwintering. Nests that survive multiple seasons become massive and often possess multiple egg-laying queens.